Where it all began

In 1973 Arja fell in love with a 15 months old Afghan Hound bitch who entered the grocery store she was working at. The owner told her that she was looking for a new home for the little furball, and Arja couldn't resist the temptation. The bitch was called Satumaan Juulia and very soon she stole Arja's heart completely and in the end became the foundation bitch of kennel Neliapilan. Ever since that have the Afghans been controlling her life - or was it supposed to be the opposite...

Arja curiously took Juulia to a dog show, and when she won Best of Breed and 2nd in Group on that very first show the how-to-spend-my-weekends -problems were solved for good... 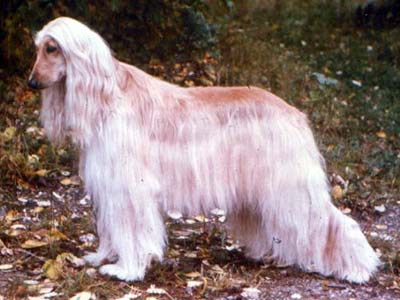 SBIS Fin Ch Satumaan Juulia
Slowly the idea of breeding started to interest her more and more and in April 1975 the first Neliapilan puppies saw the daylight. This was the D-litter, sired by Int Nord CH FinW-73 Eduardo Del Flamante who was the first grown-up Afghan Hound that Arja saw, and needless to say, made her totally fall in love with the breed. There were seven puppies born, two males and five bitches in black masked silver and golden. The only ones who were seen in the show rings were Fin & S Ch, Racing Ch & TJ-78 Neliapilan Daniela andNord Ch Neliapilan Dominet whom she kept herself. However, she never found Dominet to be structurally good enough for breeding so this line doesn't go on.
The second litter was born in February 1978, out of Juulia again but this time sired by Int Nord CH FinW-79 Tuohi-Tikan Talismani Arja had fallen in love with Talismani already when he was a 4-5 months old puppy and when he grew up to be just as she had expected, being able to add more body and bones to that of Juulia's, the choice was made. This was the P-litter of two males and two bitches in black & tan and bm golden. Three of the puppies were shown only a couple of times gaining some class wins, CAC-qualities and one CAC, but the fourth one, Int & Nord Ch Neliapilan Piparminttu "Minni" grew up to be just what Arja had dreamed for. Minni won some BIS and BIG -wins and became the Afghan of the Year in Finland 1982! The most important thing, however, has been her excellent breeding value and she has left her beautiful paw print to the pedigrees of all the Neliapilan afghans that exist even today. 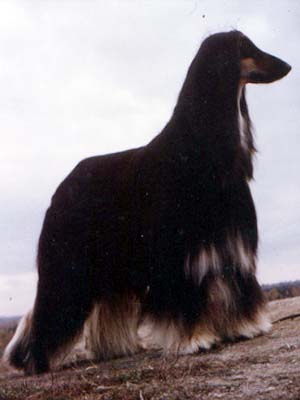